He worked on almost every one of the CBI's cases and quickly proved to be an enemy of the team when he tried to convict an innocent man of armed robbery to get information on South Side Mafia gang leaders. Only Kimball Cho, realizing Ardiles' plan will never work and he himself wasn't going to listen, proved the man's innocence. Ardiles furiously retaliated by cutting off all support to the D.A.'s office to the team.

In the season 3 finale, it is revealed that Ardiles was one of agent J.J. LaRoche's five suspects in the murder of Todd Johnson. While it was initially thought that CBI Director Gale Bertram was the killer, it was revealed that FBI agent Craig O'Laughlin was the true killer and accomplice of Red John.

In the season 4 premiere, Ardiles, at Bertram's direction, tried to charge Patrick Jane with killing Timothy Carter; but in the end Jane was cleared of all charges and Ardiles lost the case. Ardiles also appeared in some other episodes as a recurring character of CBI.

His name was in Jane's List of Suspects in Black Cherry to be Red John and he was definited "Road Block" by Jane.

He remade an appearance in Season 6, episode Golden Hammer. It was revealed his phone was bugged, and was killed at the end of the episode. His killers were revealed to be Richard Haibach and his sister in White as the Driven Snow. 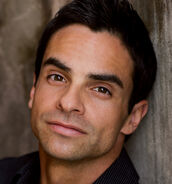 Lisbon and Ardiles discuss in At First Blush

Jane and Ardiles confront in At First Blush

Retrieved from "https://thementalist.fandom.com/wiki/Oscar_Ardiles?oldid=45007"
Community content is available under CC-BY-SA unless otherwise noted.